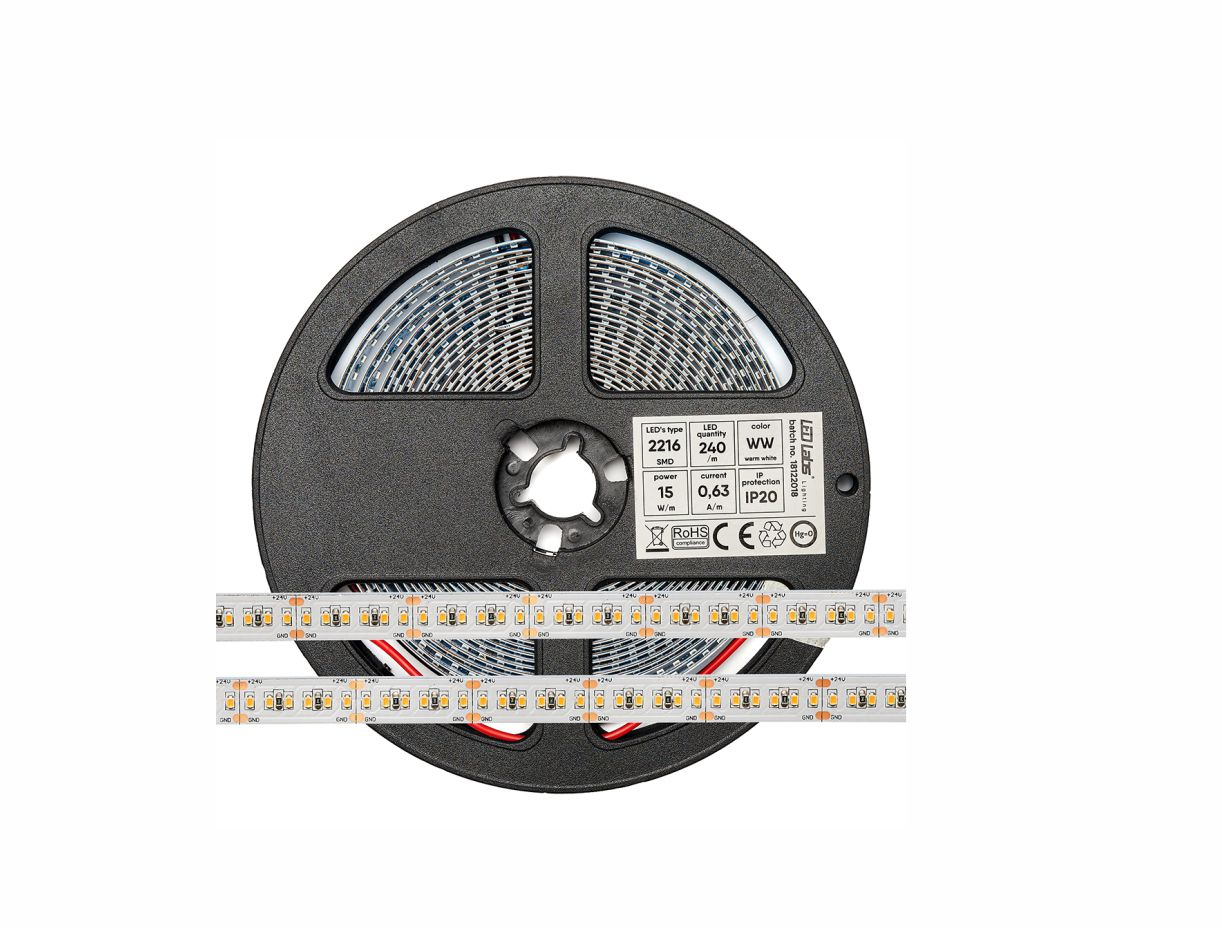 LED STRIP - A COMPENDIUM OF KNOWLEDGE

Light strips are one of the most popular forms LED light sources. They allow for linear lighting in domestic and commercial spaces. In order to properly select and install an LED strip, it is necessary to consider the selection of the appropriate product in terms of parameters such as: voltage, density, colour and length. There is also the option to choose an aluminium profile for the strip, and it is necessary to choose the appropriate power supply. 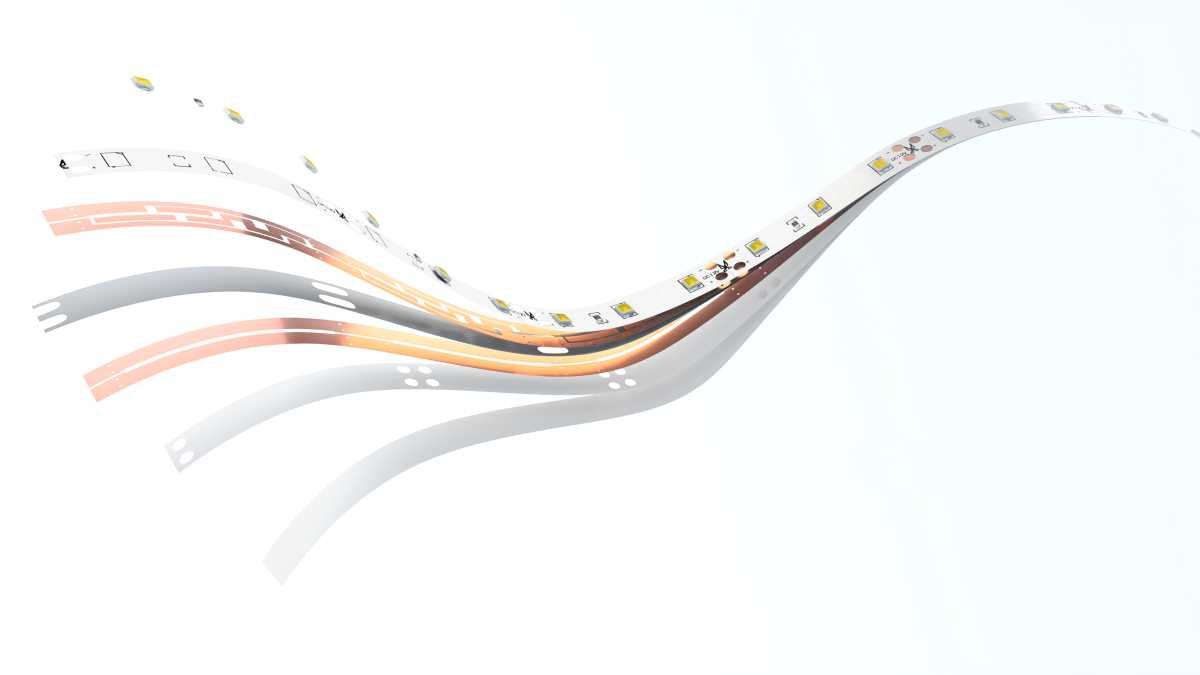 The table below shows the general classification of LED strips, along with its most important parameters. Detailed information on individual LED strips can be found in the catalogue cards.

LED strips - the most common on the market

The most common LED strips have a voltage of 12V or 24V. The 24V LED strip has a lower current, so it heats up slower, which will extend the life of the strip. The 24V option also causes less voltage drops, which means that the strip tends to light more consistently from the beginning to the end. The advantage of the 12V strips is that they are more common and popular and that they have twice as many cutting points.

The type of the LED strip is the main factor differentiating the installation method. We wire single-colour strips and RGB strips differently. In the case of an RGB LED strip, a special driver is required, which allows the selection of different colours and effects, such as smooth transitions between different colours or adjusting the light intensity.

When choosing an LED strip, the size of the diode is an important parameter. The larger the diode, the more intense the light. There are values such as 5050 or 2835 on the packaging of strips - how to interpret them? This value consists of two sections - the first part is the depth of the strip in millimetres (28 mm for the 2835 strip), and the second part of the name is the width of the strip (35mm for the 2835 strip).

The waterproof rating of the LED strips is indicated on the packaging by the IP rating. What does the IP value mean? IP20 describes strips that are not protected against water, while IP 65 strips have a special layer of gel that may be exposed to liquid.

LED profiles are an important element of the construction of LED lighting. They extend the life of the LED strip and ensure better adhesion of the strip. In addition, they allow interesting arrangements, which can achieve effects that are impossible to achieve with the use of strips alone. 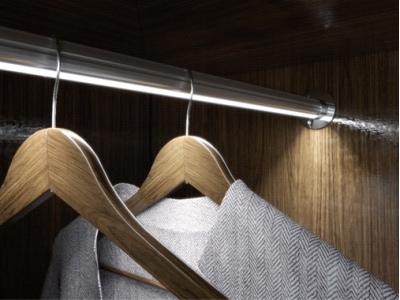 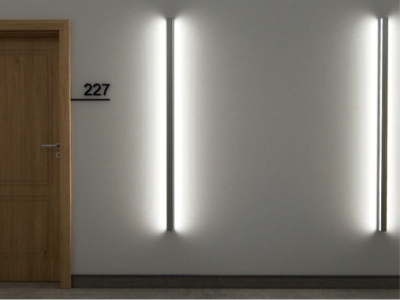 Once we have decided on a specific strip, we can proceed to choose the appropriate power supply.

How to choose the Wattage of the power supply?

We need to calculate the minimum power that the power supply must have to operate the chosen strip. To calculate this, use a simple formula:

P = power that the power supply must have;

Pm = power consumption of one meter of the chosen strip;

L = length of the strip that will be supplied with this power supply.

We decided to use the blue 300 LED 3528 SMD strip. We read the power consumption of one meter of such a strip from the table. It is Pm=4.8[W/m]. The length we are interested in is, for example, l=4[m]. Using the above form, we calculate:

So you will need a power supply that has a power of at least 19.2 W.

CHOICE OF THE DRIVER FOR THE RGB LED STRIPS 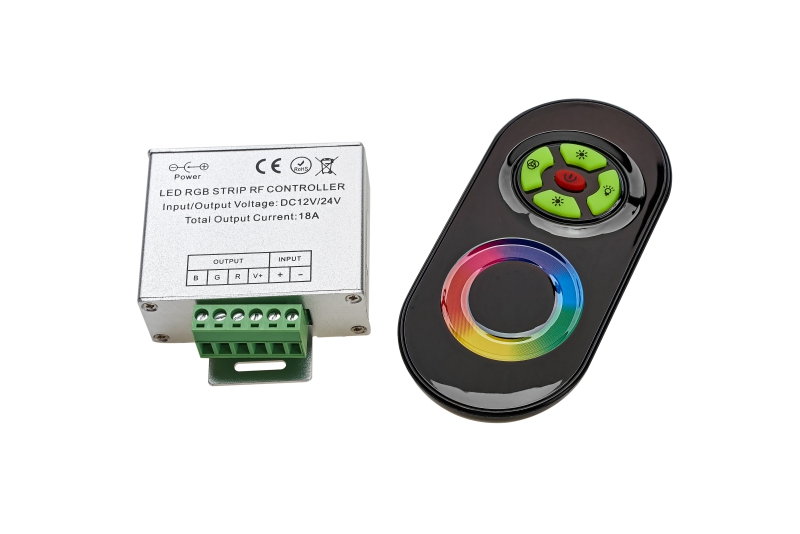 If we chose a single-colour LED strip, we skip this step and go to the next stage: LED strip connection. For the RGB LED strip, a driver is needed, which is selected on a similar basis to the power supply. It must have at least the power consumed by the selected LED strip with a given length. We calculated its value in the previous step. However, it may happen that the length of the RGB LED strip, and thus the power consumed by it, will exceed the capabilities of the driver. An RGB signal amplifier is provided for such situations. Such an amplifier also has the declared maximum power, but it differs from the driver with the fact that the RGB signal is transmitted to it from the main RGB LED driver. By using a signal amplifier, there is no need to use several drivers to control individual sections of the RGB LED strip separately and there are no problems with synchronising dynamic effects on many sections.

We now have all the necessary information, so we go ahead to installation. The diagram below shows how to connect a single-colour strip with a power supply. 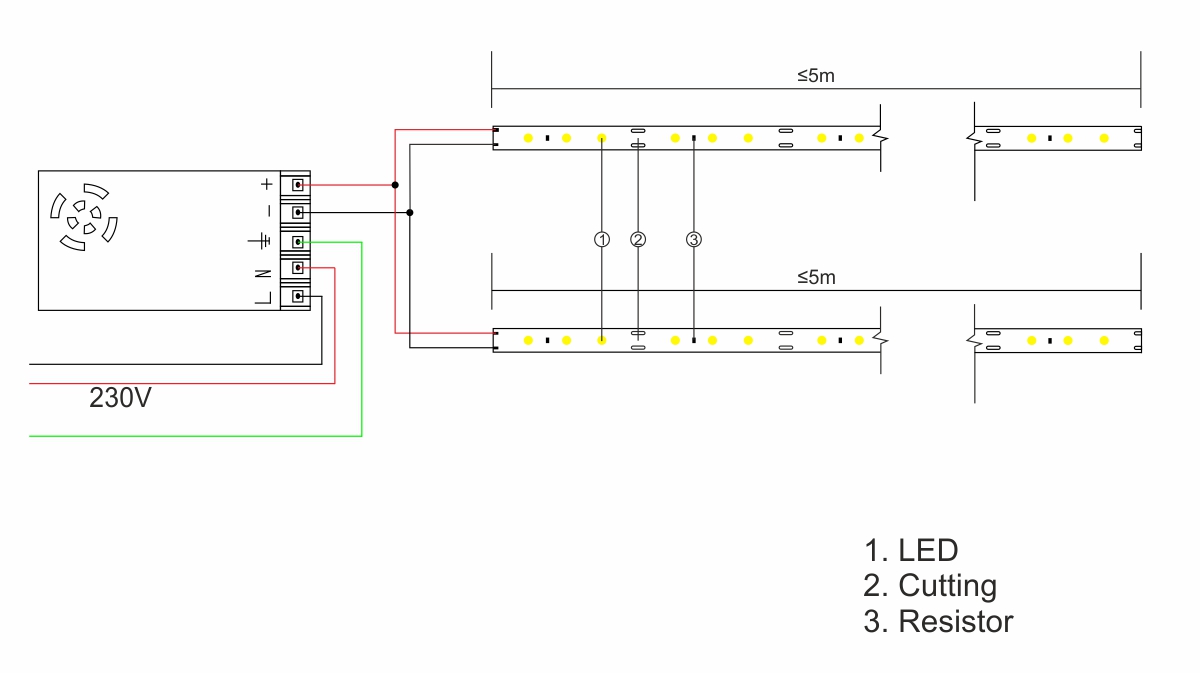 Fig.  3. Diagram of connecting a single-colour LED strip to the power supply.

If the length of the LED strip does not exceed five meters, the installation should not be difficult. However, when we connect a larger number of LED strips, we must connect each section of up to five meters in parallel to the power supply (exactly as shown in the above diagram). This solution is simple, as proven by the following example:

If we want to install a 7-meter long section of the LED strip, we lead two branches from the power supply. We install a five-meter section on one of them. The remaining 2 meters are placed on the second branch. We can run these two sections in opposite directions by placing the power supply in the middle, or we can place the sections one after the other, leading the cable along the preceding section.

This rule also applies to the installation of the RGB LED strips.

The RGB strip requires a driver, which  is selected on the same principle as the power supply. It must have at least the power required for the chosen strip. The driver is always placed behind the power supply, because it works at the same voltage as the LED strip. By placing it in front of the power supply, we will irreversibly damage it. 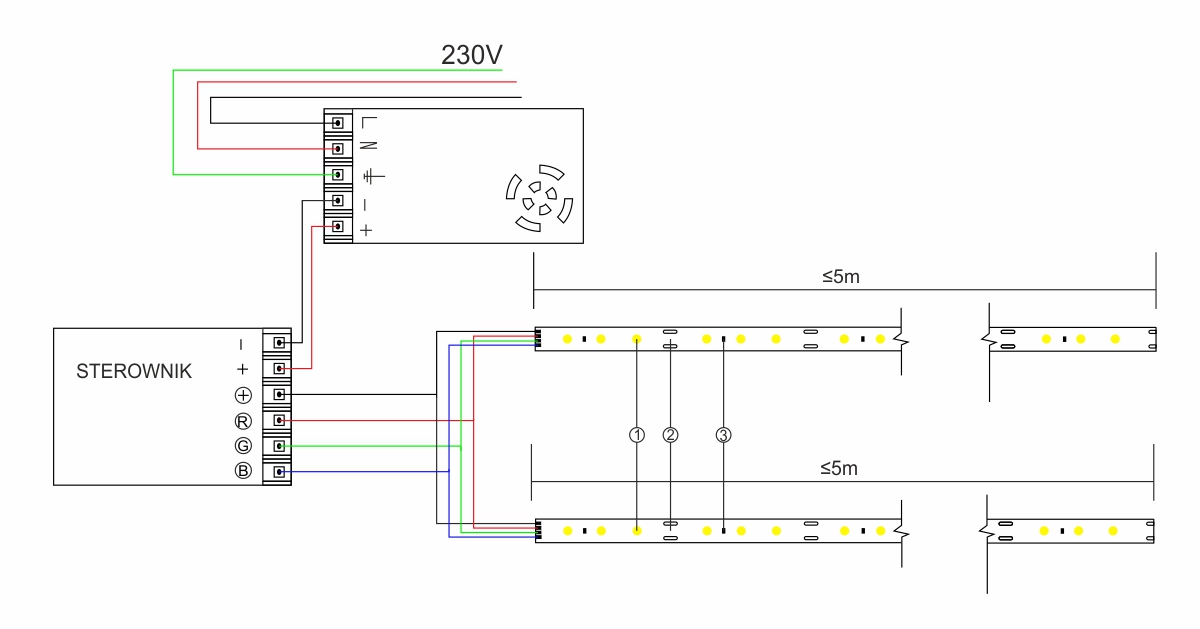 Fig. 4. Diagram of connecting the RGB LED strip to the RGB driver and the power supply. 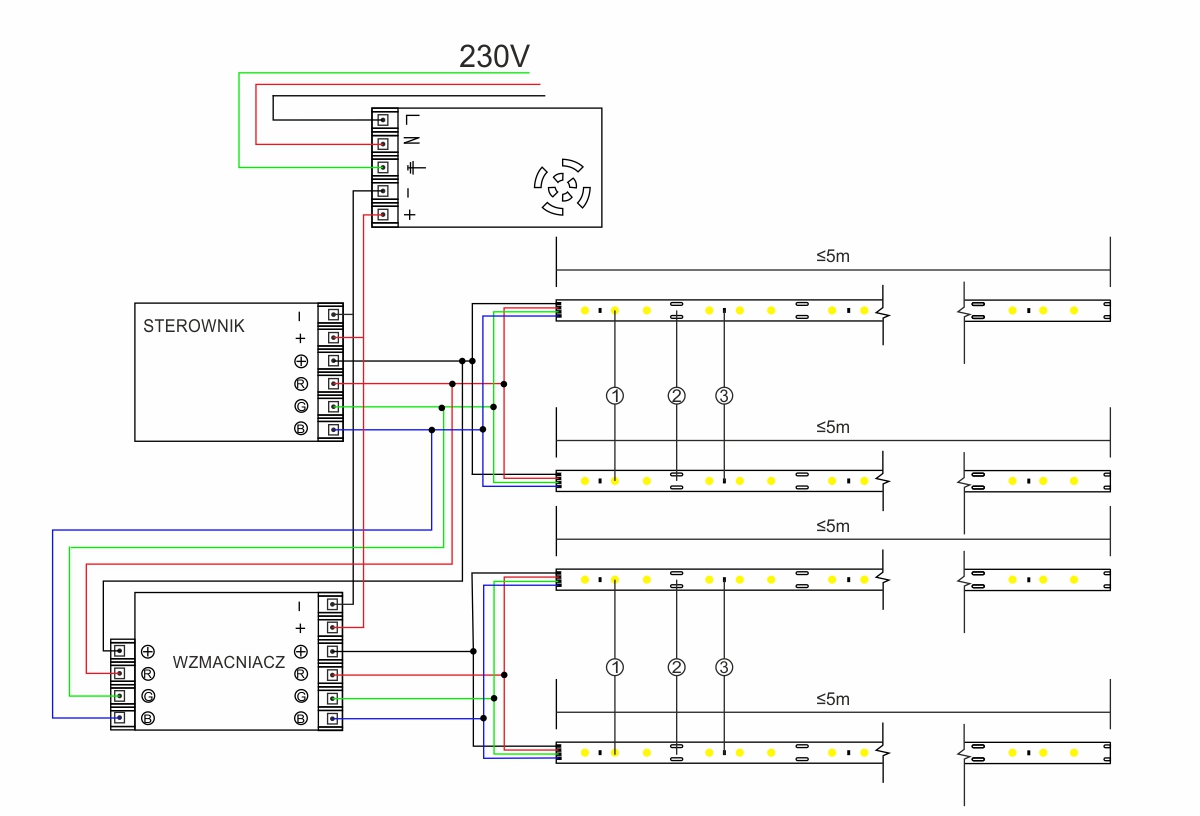 Fig. 5. Diagram of connecting the RGB LED strip with the use of an amplifier.

The amplifiers allow us to support very large sections of the RGB LED strip. Below, there is a connection diagram where the LED strip is not directly connected to the RGB driver. It only transmits the RGB signal to the amplifiers to which the RGB LED strips are connected. There are two amplifiers in the diagram, but of course there can be many more. You should still consider the Wattage of the power supply supplying the circuit. If the Wattage of one power supply is not enough to power the whole circuit, it will still be possible to support the entire circuit with one RGB driver. The only difference is that subsequent amplifiers will be powered by separate power supplies, while they will still receive the RGB signal from the same RGB driver. 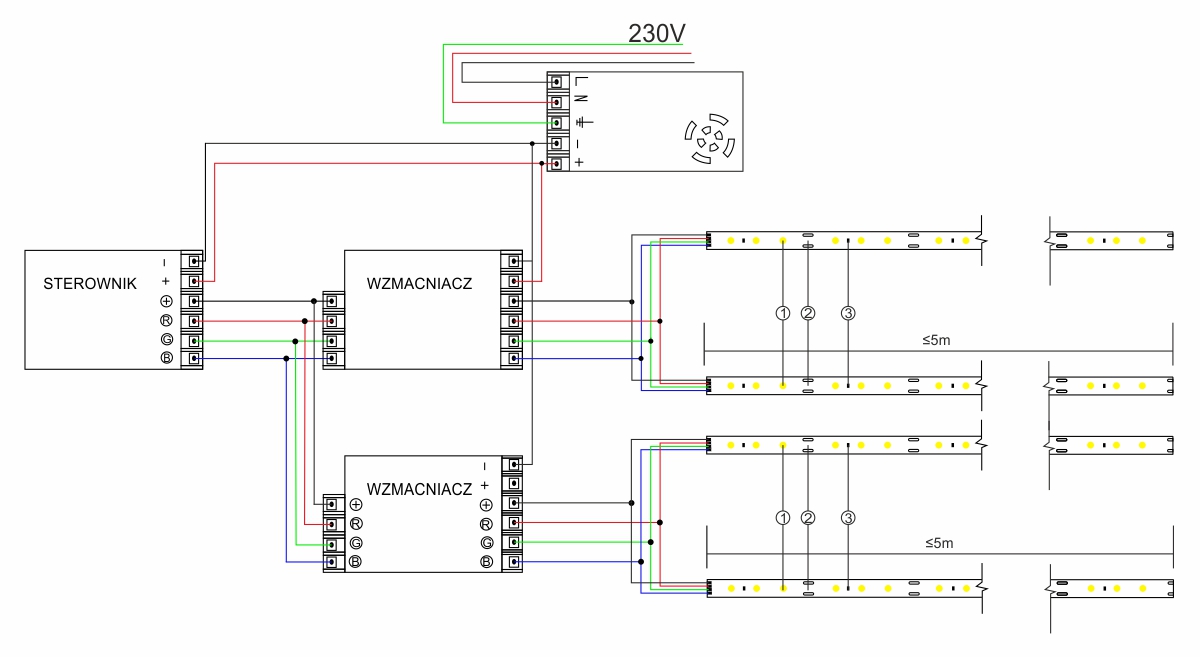 Fig. 6. Diagram of connecting the RGB LED strip with the use of several amplifiers.

If, after reading this manual, you still have doubts as to the selection of the appropriate equipment and preparation of the installation, please contact us. We will surely dispel all doubts and propose an optimal solution.