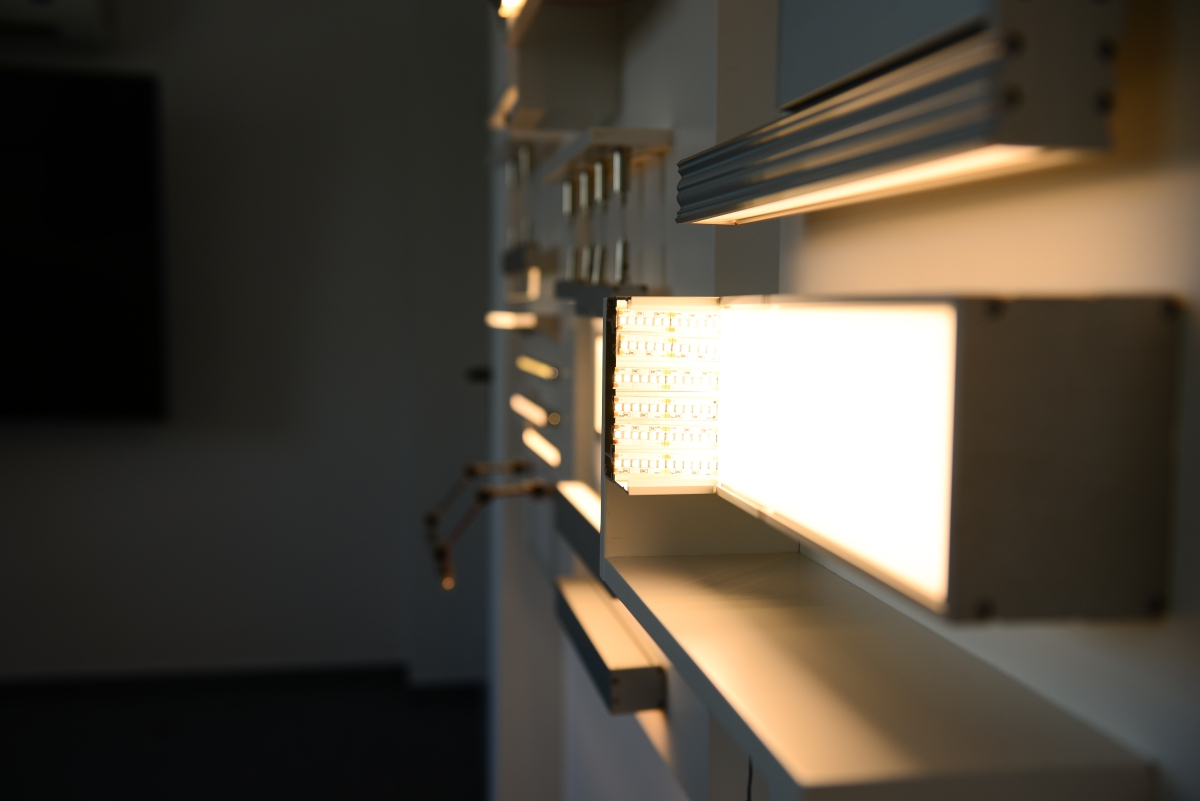 12V and 24V strips are the most commonly used LED strips available on the market. What is the difference between 12V LED strips and 24V LED strips? Can these products be used interchangeably or both connected into one project. Does the installation and use of the products from both groups require different preparation?

Assembly of LED strips with a voltage of 12V and 24V

At first glance, both groups of the LED strips appear to be the same. They are both intended for self-assembly, both belong to the group of low-voltage LED strips, requiring the installation of a power supply that reduces the input voltage flowing from the mains power to a much lower output voltage by the power supply.

They are both installed on the target surface using the same method. They have the same structure, mostly 10mm wide, and are usually sold in 5m rolls. 12V LED strips and 24V LED strips fit most of the aluminium LED profiles that are popular on the market.

So what is the difference between the 12V LED strip and the 24V LED strip?

What is the difference between the 12V LED strip and the 24 LED strip? First of all, it should be noted that despite the similar physical structure, these are two entirely different products. Both require assembly based on a voltage-matched LED power supply,but the voltage differences do not allow them to be connected within one lighting system (this could result in burning some of the LEDs on the LED strip). In addition, their shelf life and operation have several significant differences.

The 24V LED strips require the installation of a suitable power supply that supports the indicated voltage. Connecting the 24V strips to an existing 12V power supply will result in the lack of appropriate voltage supplied to the LED strip, and consequently it will have an extremely weak lighting output: flickering and reduced intensity of the LED diodes glow at the end of the LED strip section, or even no lighting. The only good news is that this connection that is providing too low input voltage to the strip will not permanently damage it.

It will be quite different in the case of connecting a 24V LED power supply to the strip supporting 12V voltage. While such prepared lighting system will illuminate the LED diodes, the strip itself would probably not last longer than a few minutes, and the much too high voltage input will damage the strip.

What are the benefits of installation of 24V LED strips?

The 12V LED strips are the most commonly used LED strips in private installations, mostly due to their widespread availability, lower price compared to their 24V counterparts and common popularity among professional installers.
So, if most of us use the 12V LED strips, and the 24V strips themselves are more expensive to buy, are there any advantages and reasons for using them at all?

First of all, the 24V LED strips are long life products. When planning the installation of a lighting system meant to last for years, or in a place to which access and therefore possible replacement is difficult, it is worth considering 24V LED strips.

They are less susceptible to noticeable voltage drops in sections longer than 5 m. If the line of light that we have planned is longer, and the possibility of creating a voltage supply system from both sides is not possible, then the solution could well be to choose 24V LED strips. Using such strips with an appropriate LED power supply will make our lighting system emit more stable and consistent LED light along its entire length.

However, 24V LED strips are not always perfect. Comparing to the 12V strips, the 24V strips have segments that are twice as long. Therefore, the cutting places are twice less frequently placed on them.

When deciding which LED strips to choose for our installations, we must remember that their choice determines the appropriate selection of power supplies and that it is not possible to combine the LED strips with different voltages into one section. In addition, very similar models of strips, built on similar LED diodes and signed with a similar manufacturer's colour, but powered by a different input voltage, may differ in the final lighting effect for a variety of reasons (see above).